Of Various Fruits is the debut album by Invisible Skies, brought to life by Kris Clayton and Anamaria Miehs. The album explores themes of the darker self, the inner world which is not accepted, and brings difficult emotions to light through metaphor. 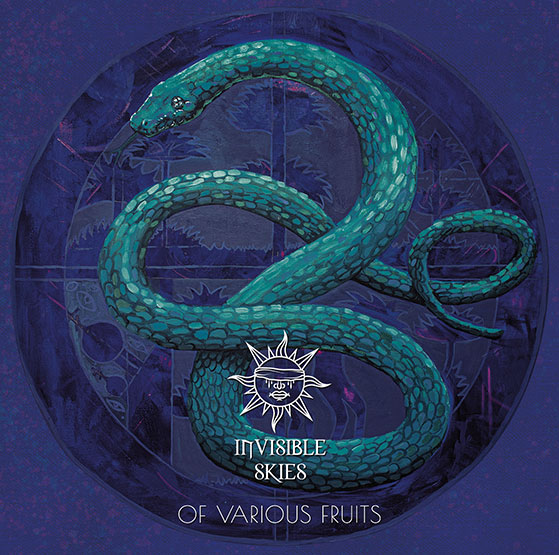 Invisible Skies is a two piece band from West Yorkshire that plays a unique cross genre style of music incorporating influences from Trip Hop, Dream Pop, Post Rock and Dub. The band was formed at the start of 2019 after Singer/Songwriter Anamaria Miehs and Guitarist/Producer Kris Clayton met at their day job as software developers and formed a deep bond over a love of unconventional music and art.

Anamaria Miehs, a native of Bucharest, Romania, moved to Leeds in 2017. She was educated musically since she was a child, then she took a break, and restarted singing as a soprano in a choir, in her late teens. She also tried joining other bands to make use of her talents, but was turned down, because her singing style didn't match the vision of the bands. Having other priorities, and commitments, she continued doing occasional art and paintings, and went to Art University. Unhappy with her experiences in her country, regarding corruption, and cultural issues, she came to Leeds, for a better, happier, and more relaxed lifestyle.

Kris Clayton, hailing from Huddersfield, West Yorkshire, has been playing in bands and honing his skills as a music producer for 20 years. His first notable band, Camel of Doom was formed in 2001 when he was just 13. Mostly a solo effort, although forming full band line-ups and playing live numerous times through the years, the band released 4 full length albums and several EPs before being wrapped up in 2016. Kris has led Psychedelic/Progressive/Industrial Metal band Self Hypnosis (Svart Records) since 2018, as well as being a member of UK underground Psychedelic Doom band Esoteric (Season of Mist Records). Despite appearing in numerous Metal bands over the years, Kris has always wanted to do something that let him create music in diverse styles to match his eclectic and extensive musical tastes.

A pink unicorn t-shirt with the words 'Death Metal' blazoned on it got the duo talking at work when Kris complimented Anamaria on her amusing fashion choices. They soon discovered that they had many interests and views in common and quickly became good friends. Anamaria had mentioned she was a singer, but Kris didn't think much of it until presented with a video of her performing Karaoke, which confused him as the vocals sounded so close to the original record. Shortly afterwards, he asked her if she wanted to form a band, which was quickly and enthusiastically answered.

They quickly got to work and managed to put together their first song, 'Timeless' in just a few hours. The speed at which the song came together and the quality of the results filled both with confidence and enthusiasm for the project. Over the course of 2019, they wrote numerous other songs, both contributing roughly half of the material. By the end of the year they had written more than enough material for a debut record and picked the best songs ready for pre-production. Vocals and live Drums (performed by session drummer Tom Vallely) were recorded in spring of 2020 at Greg Chandler's Priory Recording Studios, after which Kris spent a period mixing the album, which was then stem mastered in July, once again with Greg Chandler at the helm.

The resulting album Of Various Fruits brings together a wide range of stylistic influences and songs centered on themes of sexuality, love, mental illness, unacceptance, self-censorship, and death.

Keep in touch with us